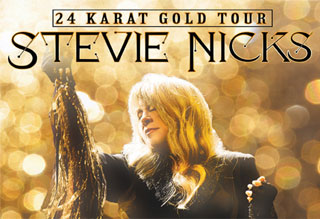 Due to huge ticket demands and stellar reviews for the 24 Karat Gold Tour, the legendary gold dust queen Stevie Nicks, a Rock & Roll Hall of Famer and multi-platinum Grammy Award winning solo artist, has happily agreed to add the new series of shows and continue singing and dancing across the stages of North America performing her classic hits along with longtime fan favorites from throughout her entire career as a solo artist and member of Fleetwood Mac. Nicks has collectively sold over 140 million albums.

“It’s been thrilling to get on stage each night and sing some of my early gems from early in my career along with getting the chance to sing the material from my last two albums, “In Your Dreams” and “24 Karat Gold – Songs From The Vault,” says Stevie Nicks. Rhino Records has also recently released remastered deluxe versions of Nicks’ first two solo albums “Bella Donna” and “Wild Heart”.