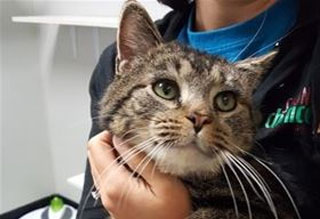 This week, Second Chance would like to feature Frank, a 2-year-old male tabby cat. This big beautiful boy kind of looks like an exotic cat!

Frank started his life as many strays do – living on the street and fending for himself. A Good Samaritan would provide food for him when she could and he would purr in gratitude for her when he would visit.

Once day, something went terribly wrong. His friend found her front steps bloody and Frank, only feet away, with a horrible facial wound. What caused such a dramatic injury was not obvious, but what was obvious was that Frank needed urgent help.

Happily Second Chance was able to assist. He was quickly seen by a vet, received surgery to repair the facial laceration and he began his road to healing. All the while, Frank was nothing but sweet.

You might think that a kitty who had to survive on the street would be a real tough guy, but Frank is really just a big mush. His favorite activity is laying in your lap, purring away. He loves human attention and is very gentle.

Frank does live with other kitties in his community room, but he prefers calm cats to more excitable ones. He would do fine as an only cat, as long as he had lots of attention, or he would be good in a household with a calm dog.

Second Chance would love to find Frank a home where he can stay safely tucked inside. We know he’s ready to leave his dangerous days behind him in exchange for a lifetime of love.