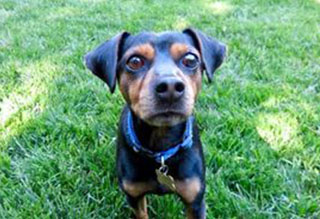 This week we are featuring Manny, who is a 5 year old Manchester Terrier mix.

Manny is blind in one eye, but it does not affect him negatively and he sees well out of the other. He is a little guy at 17 pounds and is a cuddle bug, who prefers to spend most of his time near his human, but is happy to explore the house every once in a while or lie down for a nap, if not getting immediate attention.

Manny gets along with every dog he’s been introduced to, but doesn’t seem to understand the concept of sharing. He’s not aggressive over food or toys – he just darts in to try to steal them for himself. Manny really enjoys squeaky toys and chasing tennis balls, but he’s not too great at bringing them back. He’s sweet and doesn’t bark, but he will yelp in excitement when he thinks he’s about to go for a walk.

He also enjoys car rides. He seems to have a mild interest in cats. He will leave them alone after saying ‘Hi’, unless one goes tearing by at high speed, then he’ll want to chase it. Same thing on walks – he’ll ignore every critter, unless it’s darting about, but this is expected considering his breed.

Think you might want to add cute Manny to your family? Fill out an adoption application today!