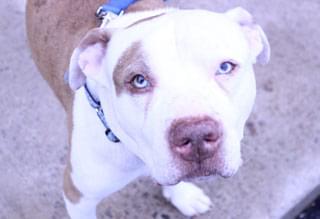 This is an adorable, super sweet, laid back guy,  He dances when you give him butt scratches and he loves to sing, when he’s super happy.

His top three favorite things to do are: spend time with his human, sleep and go for car rides!

He is house trained and crate trained, although he can be a little bit of an escape artist, if the crate is not secured well.

Pork Chop is the type of dog who really doesn’t need much besides sleep and hugs. He loves cuddling up next to your feet or behind your legs. He does enjoy playing, just not for too long. Resting is really so much more appealing to him. When he does play, he enjoys his rope toy and he particularly loves to de-fluff plush toys.

Pork Chop has been fostered with both male and female dogs, and has done well with both, but he would really prefer to be the only pet, so he can get all of your attention. For him, getting lots of love is the best thing ever. You see, Pork Chop was a neglected dog, who was basically living on the streets. When his owners were found, they told his finders that they just didn’t want him anymore. He had cuts on his face and because of his lack of care, he had heart worms, as well. Fortunately, at Second Chance, he has gotten the medical treatment he needed and the love he has longed for. Now, just needs the forever home he deserves.