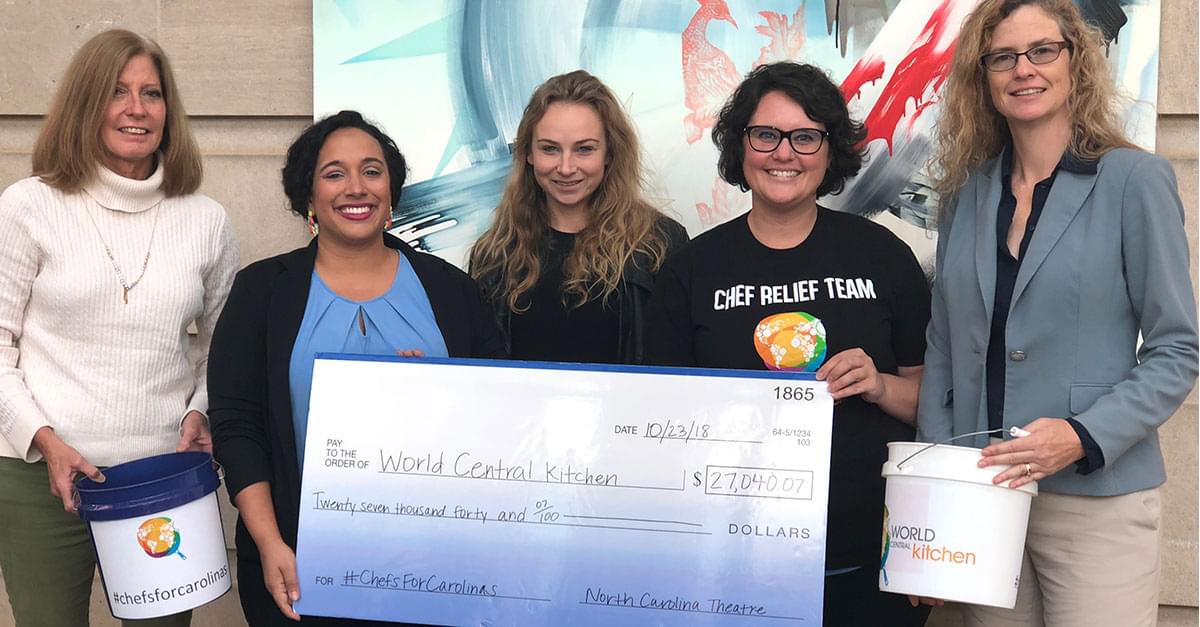 North Carolina Theatre, the region’s premiere nonprofit professional theatre, is pleased to announce it will donate more than $27,000 to World Central Kitchen (WCK), a 501(c)3 nonprofit organization working on the ground in eastern North Carolina providing disaster relief for victims of Hurricane Florence.

NC Theatre’s cast of In the Heights spearheaded efforts to collect spare change from Raleigh audiences who attended the week of performances Oct. 16-21 at Duke Energy Center for the Performing Arts.

“As North Carolina’s professional theatre, we felt compelled to give back to our community in this tough time,” said Melanie Doerner, NC Theatre’s Director of Development. “Our incredible cast of In the Heights was so dedicated to collecting donations after each performance, even setting a goal of $96,000 which is a nod to one of the show’s musical numbers, “96,000”. I could not be more proud of North Carolina Theatre and our generous patrons who continue to support our neighbors across the state.”

WCK is an organization that through a network of chefs works to enact change and develop solutions to hunger and poverty, and its mission has expanded to feed those affected by natural disasters. WCK most recently activated Chefs for Carolinas to prepare hot, fresh meals for evacuee shelters and first responders in the wake of Hurricane Florence. With the help of local chefs, culinary students, and over 5,000 community volunteers, WCK is proud to have served over 300,000 meals from five kitchens and ten food trucks delivering to 150 locations. The mission has continued even after the storm’s passing, as WCK continues to support recovery by providing meals to New Bern, Wilmington, and Lumberton and supplies to the community kitchen of the Lumbee Tribe of North Carolina.
To learn more about WCK or donate, visit worldcentralkitchen.org.

Established in 1984, North Carolina Theatre is Raleigh’s premier, non-profit professional regional theatre. With its successful formula of producing top quality musicals with top national performers and local talent, North Carolina Theatre has been instrumental in the revitalization of downtown Raleigh over the years. Through its conservatory, it has provided exceptional arts training to hundreds of local youth. By offering broad access to live theatre, while strengthening economic growth, the organization continues to fortify the cultural vitality of the region. North Carolina Theatre is funded in part by the City of Raleigh based on recommendations of the Raleigh Arts Commission.

José Andrés founded World Central Kitchen after the devastating 2010 earthquake in Haiti with the belief that food can be an agent of change. We have expanded globally and have developed into a group of chefs creating smart solutions to hunger and poverty. Today, World Central Kitchen uses the expertise of its Chef Network to empower people to be part of the solution, with a focus on health, education, jobs, and social enterprise. Join us as we use the power of food to empower communities and strengthen economies. WCK is a registered 501(c)3 non-profit organization.