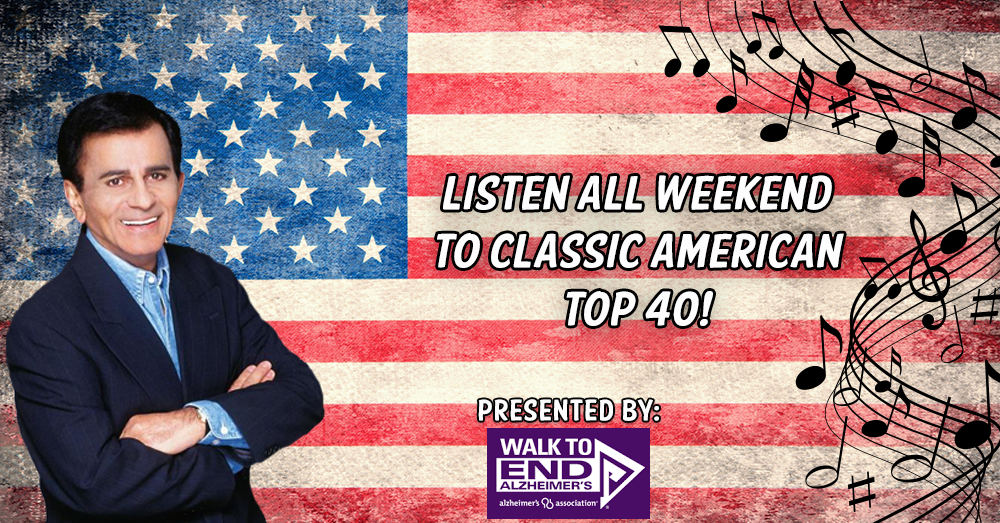 Presented by the Alzheimer’s Association. This year’s Walk To End Alzheimer’s is everywhere. Every city, every town… track and trail. The Walk on October 10th will raise funds to obtain a world without Alzheimer’s. Sign up at ALZ.org/walk.

Saturday on AT40 it’s the big songs this week 1986! Don Johnson is on “Miami Vice” and on the charts, at #20 with “Heartbeat”. The rock hit “Walk This Way” gets an update from Aerosmith with Run DMC..60s hit “Venus” is renewed by Bananarama and in the top ten. Berlin’s “Take My Breath Away” is racing toward #1, but can it unseat MTV darlings Huey Lewis and The News “Stuck With You”? The songs you know and love, some One Hit Wonders, and surprises too. Back to the 80s, every Saturday 6-10 am, with an encore presentation 8-midnight on KIX.

Sunday morning on AT40, KIX time-travels with the most popular songs this week 1974! Soul commands the Top Ten with new favorites by Barry White, Billy Preston, Stevie Wonder, and Dionne Warwick with The Spinners…The Guess Who has a tribute to NC legend Wolfman Jack “Clap For The Wolfman” … The Stones “It’s Only Rock n Roll” and Skynyrd “Sweet Home Alabama” is moving up in the survey. And, just for fun, it’s Cheech & Chong’s parody “Earache My Eye” and Jim Stafford’s “Wildwood Weed”!

The countdown, Casey’s stories, and the Long Distance dedications…every Sunday 9-noon, only on KIX.