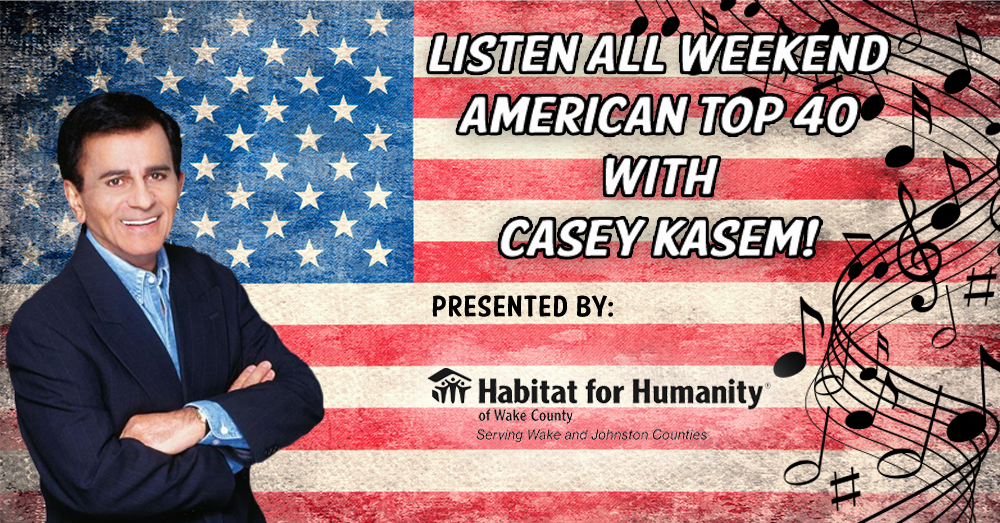 When you donate gently used furniture, appliances, building materials to Habitat for Humanity ReStore, you are not only diverting materials from the landfill, you’re supporting Habitat’s mission to build safe affordable homes in the Triangle. Donations are tax-deductible and free pickup is available for qualifying items.

Saturday on AT40, hear the big songs this week 1981 with the King of The Countdown: Casey Kasem.   It was the year of Reagan’s attempted assassination, “Dallas” was on TV, and “9 to 5” was in theaters. Dolly Parton has a hit with the movie’s theme song in the Top Ten…it’s a nice mix with some soul from Kool and the Gang, country by Eddie Rabbitt, and a ballad from REO Speedwagon. The recently lost John Lennon has two songs back-to-back in the countdown “Woman” and “Just Like Starting Over”.  It’s Back to the 80s, every Saturday 6-10 am, with an encore presentation 8-midnight on KIX.

Sunday morning on AT40,  Casey Kasem plays back the hits this week 1978! It was the first time we heard Queen’s “ We Will Rock You/We Are The Champions”…A couple of teen idols score Shaun Cassidy with “Hey Deanie” and Leif Garrett with “Runaround Sue”… Linda Ronstadt is riding a wave with two songs in the countdown…and, like most of 1978, The Brothers Gibb have multiple songs in the survey, Three this week!  The Countdown, Casey’s stories, and the Long Distance dedications…every Sunday 9-noon, only on KIX.