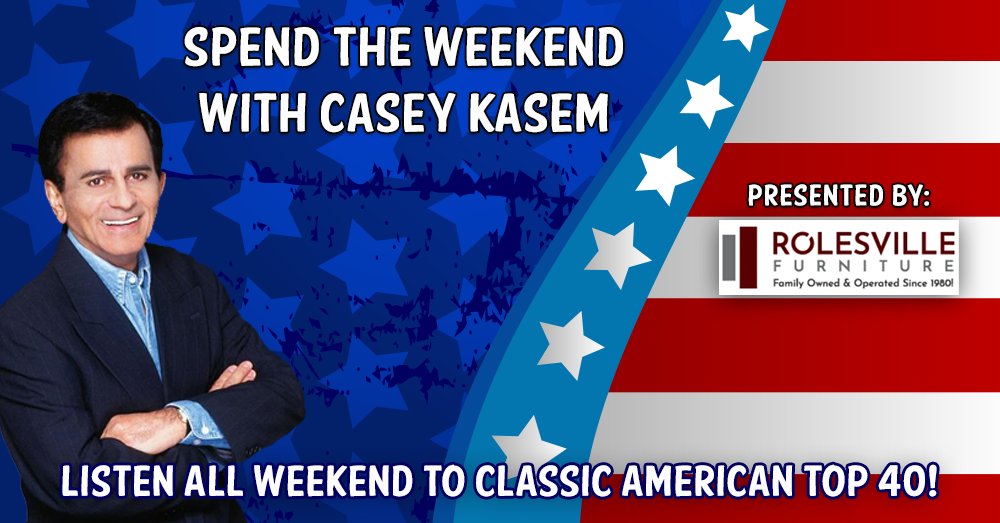 It’s the Original American Top 40 with Casey Kasem, featuring hits from 1975 and 1985! Presented by Rolesville Furniture!

Shop twenty thousand square feet of new furniture ready to take home today. At lower prices and the ability to get zero-percent financing for up to five years. Just ten miles north of Raleigh! See more at www.rolesvillefurniture.com

Saturday on AT40 hear the big songs this week 1985 with the King of The Countdown: Casey Kasem! “Back To The Future” was in theaters, so let’s hop in the Delorean and relive the mellow sides of Madonna with “Crazy For You”, and Bruce Springsteen’s “I’m On Fire”…Simple Minds scores with “Don’t You” from ‘The Breakfast Club’ soundtrack…synth-pop act Animotion has their first hit “Obsession”…and the star-studded “We Are The World “ shot up to #1 last week, there’s a good chance it will remain there! Back to The 80s every Saturday 6-10 am, with an encore presentation 8-midnight on KIX.

Sunday morning on AT40, Casey Kasem plays back the hits this week 1975! NC is well represented in the top ten with entries by Charlotte’s Sammy Johns “Chevy Van” and Henderson’s Ben E. King “Supernatural Thing”, hear John Lennon’s remake of Ben E. King’s “Stand By Me”… newcomer Minnie Riperton and veteran BJ Thomas are challenging Elton John’s “Philadelphia Freedom” for Number One, can they outlast The Mad Piano Whacker? The Countdown, Casey’s stories, and the Long Distance Dedications…every Sunday 9-noon, only on KIX.