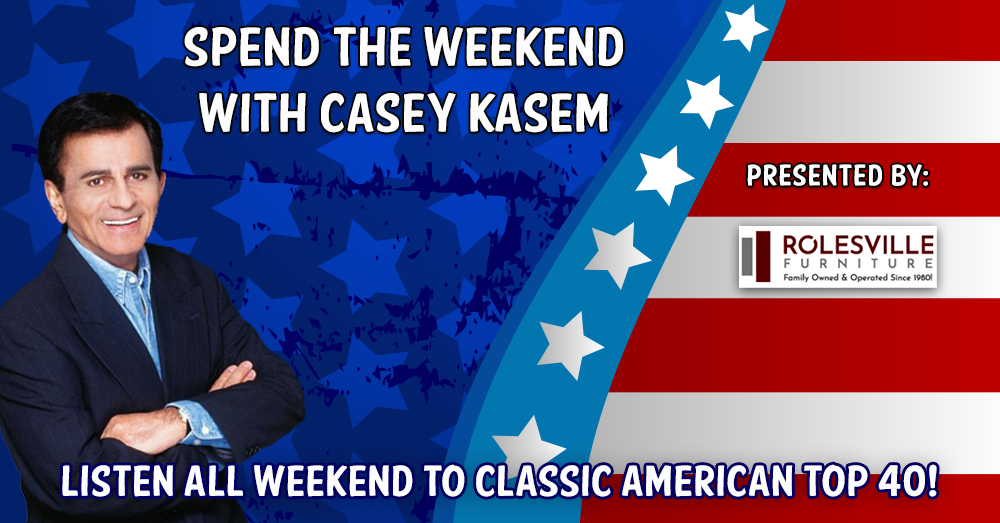 It’s the Original American Top 40 with Casey Kasem, featuring hits from 1975 and 1986! Presented this week by Rolesville Furniture! The no tax sale is going on now…  You not only get lower prices on a huge showroom full of furniture you can take home today, but you also won’t pay any tax!  Just ten minutes north of Raleigh. And online at www.rolesvillefurniture.com!

Saturday on AT40 it’s the big songs this week 1986!  In ’86, a gallon of gas was 89 cents and a Tandy portable computer was 1700.00… “Top Gun” was tops in the theaters, and music veterans were commanding the top ten this week: Van Halen, Janet Jackson, Madonna, and Phil Collins… Newcomers Pet Shop Boys (“West End Girls”) and OMD (“If You Leave”) spice it up a bit…Back to The 80s every Saturday 6-10 am, with an encore presentation 8-midnight on KIX.

Sunday morning on AT40,  Casey Kasem plays back the hits this week 1975!    What a fun mixed bag in the top ten: Pop by The Carpenters and Tony Orlando and Dawn, Soul from Earth, Wind, and Fire and The Blackbyrds, and Country with John Denver and Freddy Fender…It’s the first time we heard “Sister Golden Hair” by America,  “Philadelphia Freedom” by Elton John, and “Killer Queen” by Queen. Hear the complete countdown,  Casey’s stories, and the Long Distance Dedications…every Sunday 9-noon, only on KIX.