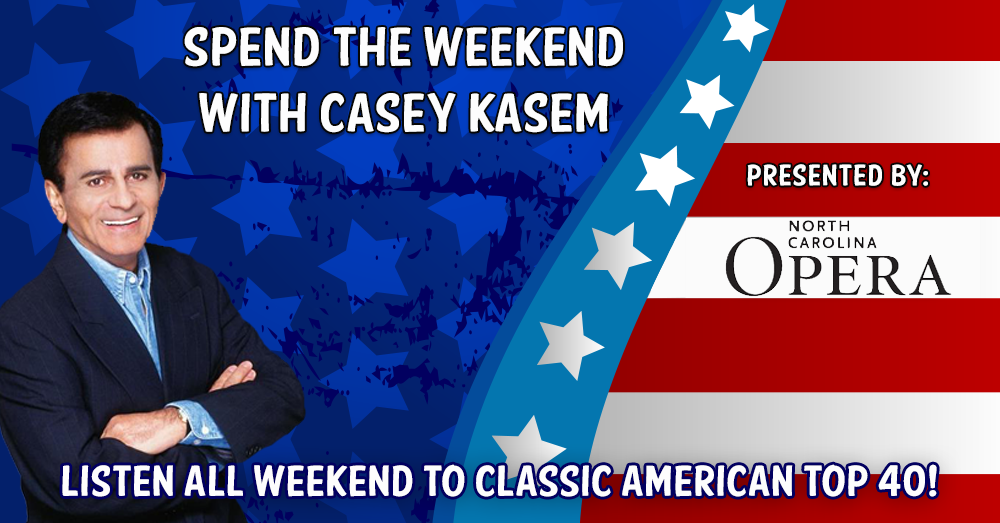 This Saturday on AT40, hear the big songs this week in 1985! Miami Vice was huge on TV… it was like watching an hour-long music video, and you’ll hear its theme song plus “You Belong To The City” by Glenn Frey, as heard on the show…the 8 minute ad for MTV “Money For Nothing” is included. PLUS two songs from the St. Elmo’s Fire soundtrack. Video music rules the charts, but can these hits upend fast riser “Part Time Lover” by Stevie Wonder? Hear the complete 80s  classic AT40 shows on KIX, Saturday 6-10am, with an encore presentation 8 to midnight.

Sunday morning on KIX, Casey Kasem plays back the favorite tunes  this week in 1976! In the top ten you’ll hear newcomer, fast mover, and former KIX-AM DJ, Rick Dees with the silly “Disco Duck”. First timers Wild Cherry with “Play That Funky Music” plus Hall & Oates with “She’s Gone”.  Also included is from TV’s The Young and The Restless, the beautiful instrumental “Nadia’s Theme”. Peter Frampton and Boz Scaggs from their now classic albums “Frampton Comes Alive” and “Silk Degrees”. Veterans Chicago are making a strong case for the second week at #1 with “If You Leave Me Now”. The Countdown, Casey’s stories, and the Long Distance Dedications, every Sunday 9AM-noon, only on KIX.

Presented by North Carolina Opera featuring Fidelio! On Sunday, November 14, 2021 at 2:00 PM at Meymandi Concert Hall, Duke Energy Center for the Performing Arts FIDELIO is generously sponsored by Ross Lampe, Jr. FIDELIO is Beethoven’s only opera, based on a true story from the French Revolution about a woman who, disguised as a man, freed her husband from prison. The original version of the opera received its premiere in 1805 in Vienna, but thanks to Napoleonic invasion and French occupation, it attracted little notice at first. Beethoven took the opportunity to rewrite the piece – including several versions of the overture – and it was successful in its final version in 1814. The inspired music, the vigor and excitement of the rescue scene, the great chorus, the beauty of the Act I quartet (that has the same feel of a slow movement from one of Beethoven’s symphonies) won over the Viennese public and subsequent audiences. At the same time, the opera’s message of hope, and of liberation from tyranny has made the piece resonate with audiences around the world even beyond its musical impact. Arthur Fagen conducts the NCO Orchestra and Chorus. Alexandra LoBianco (previously seen here in Tosca and Siegfried) sings Leonore, and Carl Tanner (previously seen here in Pagliacci and Samson et Dalila) sings Florestan. Other returning artists include Kenneth Kellogg as Rocco and Takaoki Onishi as Don Fernando.