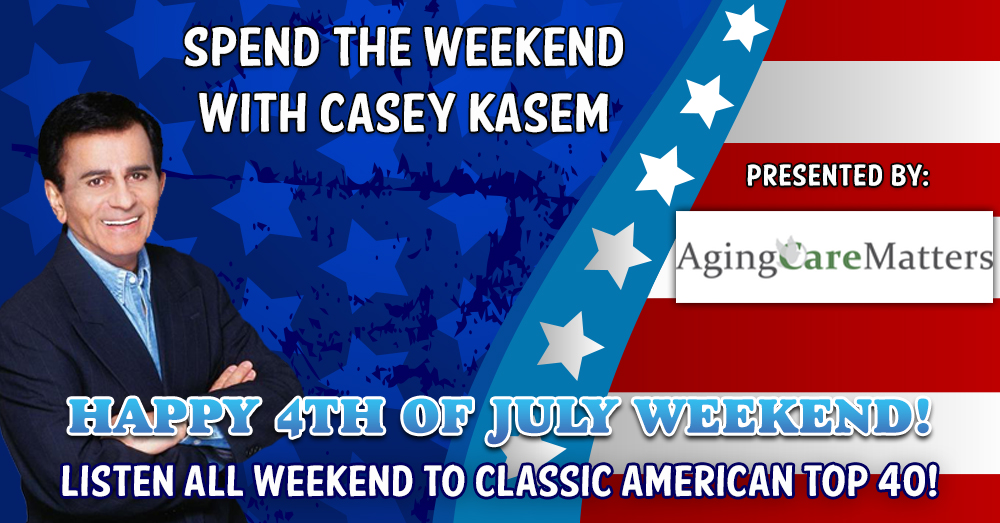 This 4th of July Weekend on AT40, hear the top songs from 1982 and 1976! American Top 40, brought to you this week by Aging Care Matters. Helping families save money, time and stress while connecting them to the right services and resources for the unique and specific aging needs of their loved ones.

Saturday on AT40, hear the big songs from a show that originally aired on July 3, 1982! Heartland favorites Willie Nelson and John Mellencamp share the Top 10 with funk act Dazz Band as well as a duet by Paul McCartney and Stevie Wonder. Hear remakes of “Crimson and Clover” by Joan Jett, “Any Day Now” by Ronnie Milsap, “Dancing in the Street” from Van Halen, and “Going to a Go-Go” by The Rolling Stones. And it looks like Euro Pop is headed to the Top:  Human League is riding high with “Don’t You Want Me.” Enjoy two chances to hear AT40 on KIX this Saturday:  from 6 a.m. to10 a.m. and from 8 a.m. to midnight.

Sunday morning on KIX, Casey Kasem hosts an American Top 40 show that originally aired during this week in 1976! We’ll find out what happens “when TV stars sing” as newcomer John Travolta from Welcome Back, Kotter is in the Countdown with “Let Her In.” The Beatles are back with a song from ’66, “Got to Get You Into My Life.” Hear newbies Hall and Oates’ “Sara Smile,” Paul McCartney’s “Silly Love Songs,” and the silly, cheesy “Afternoon Delight” by Starland Vocal Band! Tune in to hear The Countdown, Casey’s stories, and the Long Distance Dedications every Sunday from 9 a.m. to noon, only on KIX.