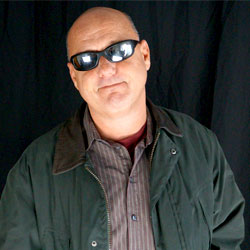 Well, what can I say about me?!

I have had an interest in broadcasting and radio since a very early age. My first radio gig was back when I was 14. I worked 2 hours a week on-air and also had cleaning duties around the station. Ah, the good old days! My fondest memories are of listening to the Greats on the blow torch stations like WLS, WNBC, & WLUP, and hoping someday to be as good on the air as those jocks. I have since traveled the country working in Oklahoma, Arkansas, and finally back in N.C.

In my spare time I enjoy working on my pool skills and playing in a weekly tournament. So far I have won zero tournaments, but I think my luck will turn around someday! I have had a ham radio license since high school and on occasion I am still active on the HF and local 2 meter frequencies. The only TV I watch is usually the Retro Channel. I love classic TV. I do also follow the program NCIS, one of the greatest shows ever made!

I look forward to being embraced by the listeners of KIX 102.9… not at the same time; that’s a lot of people embracing me… I might get smothered! I enjoy the music on KIX as much as you the listener. I have been a fan of KIX for many years. Well, since it signed on many years ago. I am thrilled to be a part of the KIX team!