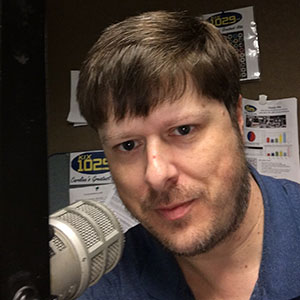 “Cooper was born in a log cabin in rural Kentucky, before his family settled in Illinois. Having no access to formal education, young Cooper taught himself to read, write and cipher, eventually becoming this nation’s beloved 16th president….”

Wait. Scratch that. That was Abraham Lincoln’s biography I was thinking about. If it helps, we are both relatively tall and awkward looking.

I actually grew up in St.Louis, and have worked at many radio stations on my way to the Triangle area, mostly in my hometown and in Nashville, but also in such exotic, warm weather tourist destinations as Duluth, Minnesota. (City motto: ‘ At Least We Aren’t Fargo!’)

After following my wife, Mary Todd Lincoln (wait…that’s wrong again) to the Triangle, I settled on Tobacco Road, equidistant between Duke and UNC Chapel Hill. I root for Duke in football, because I like traditional underdogs, which also explains why I can’t really root for them in basketball. I still have some gear left over from when I first got to town and tried to be a UNC fan, though, so if you see a guy at the gas station who is wearing a Tar Heel hat and a Blue Devil hoodie, I likely just threw on the first things I could find in my closet and am not actually having an existential crisis. I can’t say I get that worked up about NC State either way, but I do admire the Wolfpack’s skills in relation to the art of football tailgating.

As the weekend warrior, I’ll make sure you know what’s going on in the Triangle for fun, and if there are traffic tie ups on the way back from the beach, or breaking news, I’ll be live with the info you need.